WEATHER WARNINGS: There are no warnings in force. 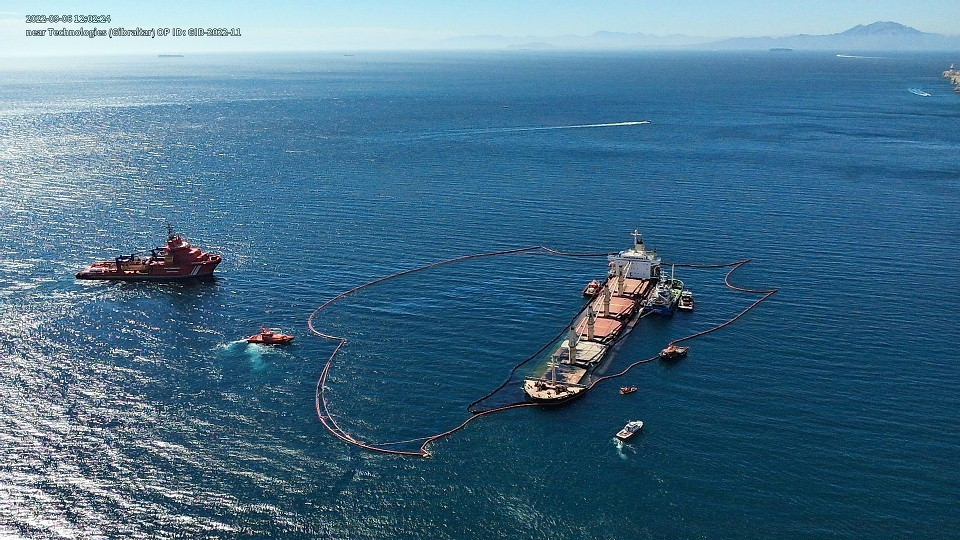 The Gibraltar Contingency Council, chaired jointly by the Chief Minister  Fabian Picardo and the Governor Vice Admiral Sir David Steel, convened  at noon today at No 6 Convent Place. The Deputy Chief Minister Joseph  Garcia and Minister for the Port Vijay Daryanani also attended.
The Captain of the Port has advised that the situation remains stable  and, with the majority of the fuel now extracted from the vessel, that  the operation is now moving from the emergency stage to its recovery phase.
As a result, the Gibraltar Contingency Council has agreed to step down from the Major Incident posture.
The Gibraltar Port Authority continues to lead on response and recovery  operations.

STANDING DOWN FROM MAJOR INCIDENT POSTURE
The majority of the OS 35’s low sulphur fuel oil, diesel and lube oil have  been removed from the vessel.
The Gibraltar Contingency Council has therefore determined that the  hazard presented no longer requires a Major Incident Posture.
All necessary resources will continue to be at the Captain of the Port’s  disposal for the ongoing response and recovery operations.
A Recovery Coordination Group, to be chaired by the Civil Contingencies  Coordinator, will be comprised of relevant authorities to co-ordinate the  multi-agency response going forward. This will report frequent updates  on progress.
The Captain of the Port is considering the re-opening of regular Port  operations tomorrow if he is satisfied that the Port has the resources and resilience at its disposal to respond any difficulties that it may experience due to normal bunkering operations. Detailed plans for this  are already in the advanced stage.
This posture will be kept under constant review. The Major Incident  posture can be re-established immediately if required.

REMOVING FUEL
Work is ongoing, insofar as possible,to consolidate remaining fuel from  various small tanks into the previously emptied diesel tank starboard  and pump it out to the slops barge.
Tests are being conducted to assess whether there are any further  extractable residues in tank 1 centre starboard.
No oil was encountered during tests for residual fuel in Tank 1 port and  Tank 1 centre port.
Once all extractable residues have been removed from Tanks 1 and 2,  salvors will investigate void spaces and non-tank spaces for the presence of any escaped fuel that may have been trapped as a result of the submergence of the vessel.

TACKLING FREE FLOATING OIL
Skimming operations continue directly on the vessel’s deck and within  the first containment boom.
Sheening patches inside the second boom are manageable and being  tackled using sorbent booms.
Waters outside of the secondary boom on the eastside and within the  bay are substantially clear of free floating sheen.
There is no longer any sheen from the vessel travelling towards the west side of the Rock. Sheen coming from dirty response vessels returning to  berth is being tackled by a specialised small vessel with sorbent booms also deployed.
Close communication and cooperation with Salvamento Maritimo  continues and their expertise and resources are crucial to the ongoing  response and recovery.

FISHING
Advice on fishing is being kept under daily review and assessment.
The current advice from the Department of Environment is that the  contamination has mostly been contained and much of the free floating  sheen has either been collected or dispersed. Containment booms around the OS 35 are working well.
With this in mind, authorisation for resumption of fishing is being  reviewed with a view to allowing fishing to recommence tomorrow.

BEACHES
The situation at the beaches will continue to be reviewed daily, with  clean up operations at Sandy Bay and Little Bay ongoing.

Jellyfish nets will be removed from Little Bay and Sandy Bay. This is to  prevent oil deposits on the nets from causing further sheening. These  nets will be cleaned before being redeployed for the next bathing season.

A Recovery Coordination Group will now convene in the coming days in  support of the Captain of the Port and provide frequent updates as the  recovery and response operations progress.

The Captain ofthe Port has advised that overnight the situation has  remained stable. Onboard, the situation in the engine room remains under  control, and works have continued throughout the night.